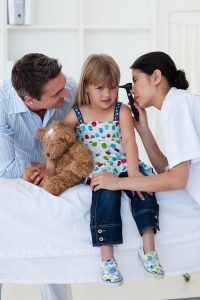 Ear infections are one of the most common forms of infections, particularly among the young. Some studies estimate that more than 80 percent of infants will have at least one middle-ear infection (acute otitis media) before they reach the age of three and ear infection is the most common reason for children to see a doctor with about 16 million kids to the pediatrician each year (Parents Magazine, January 2010)

While ear infections are relatively minor, they can become serious if they become chronic. Infections are often treated with antibiotics and this can be problematic. If the infection is caused by a virus antibiotics will be useless and can often cause stomach distress in children. Even if the infection is bacterial, antibiotic use can lead to drug-resistant bacteria and even lead to future diseases including more gastrointestinal disease and cancer.

Doctors often recommend a waiting period for ear infections, as they often clear up spontaneously. One study showed that 80% of children given only pain and fever medication recovered within a few days. Antibiotics only increased the recovery rate by 10% while between 3% and 10% of the children would develop a rash, with 5% to 10% developing diarrhea. (Mercola. December 02, 2010)

Some children have vertebral subluxations (misalignments of spinal bones) acquired during birth or thereafter. At Hinterland Chiropractic our doctors can use gentle chiropractic adjustments to realign the head, neck and back. Such adjustments can help fluid drain from the ear and make a huge difference to the health of a child.

Trials show that chiropractic care can be effective in treating ear infections. In one trial a chiropractor adjusted subluxations in 46 children suffering from ear infections. 93% of the patients improved, with 43% requiring only one or two sessions. (J Manipulative Physiol Ther 1996;19:169-77.) Another report noted that of 332 children under age five who received chiropractic care, only 11% had a recurrence within 6 months. (JCCP 1997;2:167-183.)

Chiropractic is a form of alternative and complementary medicine parents most often choose for their children (Chiropr Osteopat 2010;18:16). Chiropractic focuses on spinal care, nutrition and other preventative measures instead of drugs.

At Hinterland Chiropractic our doctors understand the delicacy of the young spine, which is mostly composed of cartilage. Chiropractic adjustments are very safe. One survey reported a rate of adverse events at 0.0006% (Explore [NY] 2009;5:290-5). A study of prescriptions for children found an adverse prescription event rate of 0.24% (JAMA 2001;285:2114-20) meaning prescriptions had 400 times the risk of adverse affect.

Come to Hinterland Chiropractic on the Gold Coast!

Hinterland Chiropractic utilises holistic and non-invasive methods of treatments to help our patients recover from a range of health issues, including ear issues. Our skilled chiropractors and their dedicated team can find the root of your problem and assess your overall health, lifestyle and environment. Working together we can find natural, holistic, and reasonably priced treatments for your individual condition.

See us today and receive a COMPLETE Consultation and Examination.
Yours for ONLY $45! . Call us today on 07 5527 3133
or simply book your appointment online.